Your browser does not support JavaScript!
3 Major Signs of Engine Trouble 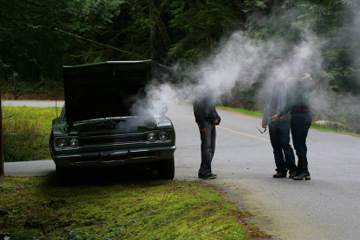 As engine replacement and rebuilding specialists we often get customers calling in who are unsure if they need a replacement engine on their vehicle or not. Most people go through life without ever having to worry about replacing an engine, but those unlucky ones that do, have little to no knowledge of what to look out for. So we’ve put together a list of 3 of the major signs of engine failure to give motorists a better understanding of whats going on under their bonnet.

1) Smoking: Smoke coming from your exhaust is probably one of the most well known signs that your engine is having problems. They come in 3 distinct colours and each of them gives us a good indication of whats going on in your engine.

– White Smoke: If you’re getting a lot of white smoke coming from your exhaust then theres a good chance that you’ve either blown a headgasket or have some damage to your cylinder head. The white smoke you are seeing is actually a result of the coolant and water entering the combustion chamber.

– Black Smoke: Black smoke is normally a sign that too much fuel is getting into the engine. Most common causes of black smoke are faulty injectors, a faulty injector pump, a faulty egr valve or a faulty air filter or even turbocharger failure. If the problem isnt addressed, it can eventually lead to engine failure. The good thing about black smoke is that its an early warning sign which if you address quickly, can save you on a costly engine replacement bill.

– Blue Smoke: Theres only one thing that can burn blue, and thats engine oil. Several things can cause this to happen but the basic reason is the same – engine oil is getting into areas where it can be burnt. Now this can be happening at the top of the engine in your cylinder head where oil is leaking past valve guide seals. If so, your cylinder head will need to be removed and rebuilt. Or, this can be happening inside your cylinder block due to worn piston rings. Piston rings go round the piston, and as the piston goes up and down in the cylinder, they form a sealing surface that allows just enough oil to keep the cylinder walls lubricated. If these rings are worn, too much oil gets past the sealing surfaces and mixes with the fuel then burning off producing the blue smoke. If the problem is with the piston rings, your engine will need a more extensive rebuild.

2) Loud Noises: If your engine started producing a loud knocking noise like someone is banging at something with a hammer, then there is a good chance that you have a problem with one of the bearings either on the crankshaft or connection rod which connects to the piston. Although ultimately this means you will need an engine rebuild, the worst thing you can do here is to continue to drive it. Identifying and addressing the issue early will mean you can have your engine rebuilt at a reasonable price because no irreparable damage has been done to your cylinder block, head or crankshaft. But if its continued to be drive in this state, you could end up with a great big hole in your engine leading to a massive repair bill.

Not all knocking noises are a sign of bottom end failure in your engine. It could be a sign of something in the top end like a worn camshaft, leaking or sticking hydraulic cam lifters. If thats the case, these can be resolved without stripping down your entire engine.

3) Running Rough and Loss in Power: Loss in power over long periods of time and covering thousands and thousands of miles is to be expected. But if your engine experiences a sudden loss in power then theres a good chance that a component has failed in your engine and needs to be addressed.

In conclusion, non of us want to ever experience engine troubles, but if you do experience any of the above symptoms then we always recommend that you address it quickly, as in most cases you will save yourself on you hefty repair bill.

If you are experiencing problems with your engine and need a repair cost estimate or just general advice, then please feel free to get in touch with our team on 0208 133 6004