Your browser does not support JavaScript!
Witness tomorrow’s speedsters at Frankfurt Motor Show 2015 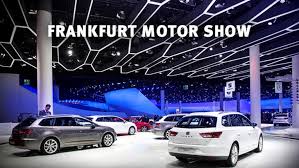 Putting an end to a yearlong wait for car enthusiasts, the world’s largest auto show—Frankfurt Motor Show—will unveil the most awaited cars this September. The show is two months away, but it has created a buzz in the international automobile industry; the frenzy is because the event will showcase the most yearned cars from automobile giants. The 66th International Motor Show is going to bear the “Mobility connects”.

The Frankfurt motor show—one of the most renowned European car events of the year—will witness major launches from leading automobile manufacturers, including Audi, Bentley, Alfa Romeo, Jaguar and Maserati.

This year all the stakeholders of the automotive industry are set to be amazed with the launch of Alfa Romeo Giulia, 2016 Audi A4, Bentley Bentayga SUV, New BMW 7 Series, 2016 BMW X1, Infiniti Q30, Jaguar F-Pace, Kia Cee’d 2015 facelift, Kia Sportage and Lotus 3-Eleven.

Since 1897, the event has been a great platform for the world’s largest automobile manufactures to display their brand new endeavors with futuristic orientations and innovative concepts.